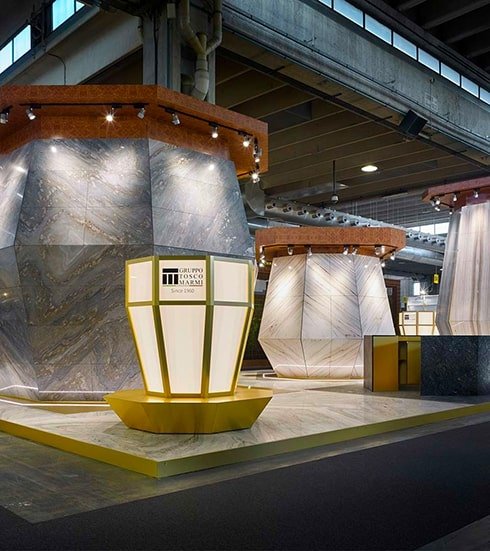 Best Communicator Award for best stand in the “design” category

At the 52nd Marmomacc fair, one of the two most important stone industry trade fairs in the world, together with the Xiamen International Stone Fair, the project by the Andrea Milani Architecture Studio for the Tosco Marmi Group won the “Best Communicator Award” as the best stand in the “design” category, from among over 1,600 exhibitors.

The eleventh year of this prestigious award recognised the most deserving stands in each category (design, stone, machinery, tools).

An enormous disproportionate scale which, exactly like a still life by Morandi or in the best oriental ceramic artefacts, skilfully combines objects on a neutral plane, describing and outlining forms that can be interpreted in various ways. Gigantic octagonal-based vases (two of which feature habitable internal volumes) display the various types of Palissandro marble in a genuinely unusual way, as they are entirely clad with stones from the Tosco Marmi Group.

Twelve types of Palissandro marble mined from the Crevoladossola Quarry, the only quarry in the world where Palissandro marble is found, three types of grey Suvereto marble, and various kinds of granite are on display to visitors on a “golden” platter and embellished with small, sparkling connections to signal a change in material.

The objects in this timeless composition imply references that vary according to the observer’s geographical origin. It does not matter whether they are urns, vases, or lanterns; the encounter between different cultures is what matters.